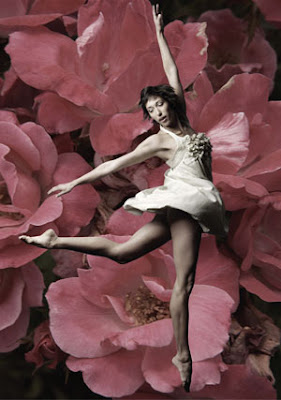 What was your dream??
Something you thought you would & were certain that you could???
&What has happened to it now?? Has life shaped up the way you wanted it to?

I remember my dad saying that as a kid he wanted to be a bus conductor because of the limitless freedom it offered to him ( I guess his main dream was to get freedom from the over fathoming attention a single kid gets ) .

My own dream was not so lofty , all I ever wanted to be as a kid ( & as far as my memory takes me back) was to be a ballet dancer . ( are you laughing? ) Guess what I used to actually practise standing on my toes , do the split your legs thing & all that . I used to think so what if i can't pursue it right now , I"ll practise now & by the time I"ll grow up , I"ll be ready. :) ahh childhood - when you believe you can get whatever you want ( I still do) .

Then , time passed & I wanted to be a psychiatrist & being a doctor seemed to be a noble profession :). By the time i reached my 12th , had started hated bio & loving maths :) . I even gave all the Entrance exams AIPMT , AIIMS ( !! ) etc etc .Finally mustered up the courage to tell my folks that human / plant anatomy was not my thing .
( phew ! )

I could still touch my head with my toes :)

Three years have passed since that day , have gained almost 8 more kgs ( no issue ) , have met an ocean of people ( some good , some better) , gone from one sem to another , made gpa's more significant than they ever were ,but , I can't remember the last time I did a piroutte . Have I let go of my dream ?? the perfectionist in me?? the kid who got up at 2 am to study for her sanskrit test ?


. As we grow up, someone or the other might say " oh cmo'n stop being a baby " , " grow up" & with our impressionable minds we think that yaaa what a baby I was .

I guess at some point or the other all of us have let go their dreams regarding it as childish , but what if we hadn't ? The point here is not whether we achieve what we dreamt about but what our dreams promised to give us .
All I had to do was think of times gone by , & what I had wanted to be then.

Writing this post made me feel that somewhere down inside I still know that girl ( that bachhi :) ) That kid in me reminds me that I can still do it , do whatever I wanna do , dance the way I like to .
New dreams take the place of older ones .Life is ever changing ever demanding but the crux remains same .

p.s=" pehla nasha" my blog song reminds me of the time when i had my first crush on a cute guy called amir khan :)
Posted by I'll try 2 be truthful at 8:09 AM

you always can do what ever you feel like accomplishing. Just that you need that extra push in the right direction, and fire to excel :) then, the world is yours.I dream too. More than dreaming, I get visions and dejavus. Nice post!!!

life is to dream and dreams bring bak a lot of memorien as if we r living them again..

hey btw...Now I am listening to pehla nasha..
its ma blog song too..lol

Yes girl, Dream on!! Dreams are the only thing we have to cling on, where everything is possible! That's the beauty of dreams...*sigh*

As a child, I wanted to be everything under the sun. A new career each day! Ranging from bus driver, gardener, artist, fashion designer, auto driver.....limitless options! An age where we think anything is possible!

Some dreams come true...some stay as dreams forever. Either way, dreams are beautiful and r a must for a happy life. :)

A very thoughtful post.. Dream on.. I had a plethora of dreams..as a kid i once asked my dad when watching some courtroom scene on tv....policeman is the most powerful man na ..he can arrest any one he wants.. dad said no above him is the lawyer cos he fights the case and can save a person from goin to jail.. but then above him is the judge cos his decision is final.. but the most powerful man mebbe an ias officer...
so i always wanted to be one :) am nowhr closer to my dream.. but then whats life wid out some wishes some dreams..

WOW , that was profound .

if the DREAM breaks its the dream not the DREAMER . Dream go forth and get it. :) .

One of my most fev movie scene is from " The Last Samurai " , where TC in a brawl with a samurai, rises of again and again ,until the time he no more could .

" The video of the remix version of that song is too good " .

Dreams are a product of wishful thinking and the sub-conscious need to live in an utopian world.

Hence you will never stop having dreams, even if they actually materialize, you will have more dreams and hence you will write an infinite amount of blog posts wondering how it would feel to fulfill your dream.

Did that make any sense?

@preeti
yup we need to get out of our slumber & get what we want to. wow deja vu's??

@tara
thanx *An age where we think anything is possible!* it almost is

@amrita
once even my dad had wished that i'd be an IAS officer , but alas had no interest in that :). koi baat nahi aap ab bhi koi kam nahi ho

@tyro
*if the DREAM breaks its the dream not the DREAMER .* i modified it into ---"dreams break , dreamers don't" & put it as my orkut tag , plagiarism ke liye jail me mat dalna !!
tu pehla nasha ke remix ke bare me bol raha hai na?? ya wo bachho walo :) actual first crush

hi dear friend,
how r u?
ur blog is very nice...
pls visit my blog for great information..

Happy Diwali in Advance...
enjoy the festival with happiness..

We don't always dream, thinking that someday it may materialise..sometimes it offers us peace of mind for the moment

Now girl, choose your loyalty...mamu or nephew
and when did this movie release, early 90s?

As tom Bradley says "The only thing that will stop you from fulfilling your dreams is you."

deramin is snother life for me
..all dat u cant hav in reality..its dere..
atlest dere u can have all dat u want

@sachin
happy diwali to u too

@vanilla sky
hmmm yes i was about 5 then , i didnt know what a 'crush' meant it was what we called favourite hero . & choice?? mamu then , nephew now :D

My dream was always to become a mother. Not fulfilled yet because along the way, I started fulfilling other dreams. :)

BTW, Aamir Khan is MINE!

haan yaar. at times I feel certain things that are to take place or are taking place, have already taken place. I am typing now. to your post, I feel i ve already done this (err.. yeah I ve commented a ton times but you get the point). Preeti is crazy :) bachhaaooo :):)

@solitaire
of course you"ll become one :) dont forget to post the pics of the lil one. Ya ya amir is all yours.

The "Pie" that I have regained is a software Job, something that I've always wanted, but was crushed when I took up Electrical Engg. here instead of Computer Science.