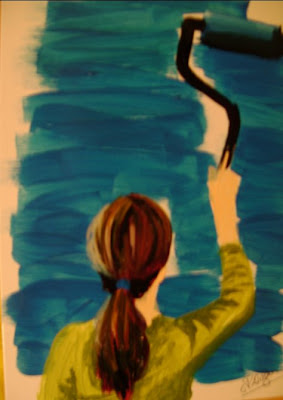 Been tagged by rachael :) . its a first from her .So here it goes ,
1.What have you realised recently?
Many many many things , have realised
--that there will always some people who will never leave your side.
---- that just because someone doesnt do what we do , they arent wrong in doing so .
----that life is what it is & it will take you where it has to ,but of course, in the end you can say that I showed it the way.


2.Have you given your first kiss away?
a typical sati savitri answer would be " of course to ma &dad" but i know well which first kiss this question asks about , & no that has not yet come my way .
*unless of course you take that time when i was a 9yr old & kissed amir khan's screen image hehehhehe*

3. If you were to be stranded on a deserted island, who are the 11 blog buddies you would take?
the island wouldnt be deserted then hehheh.
But actually , maybe no one. thats really cold of me na? but thats what i am like , very few people have my full confidence. &thats why have named 'tis blog"ill try to be truthful" (however melodramatic it may sound).
because today even if i do name 11 bloggies , will that chance really come ?
vanilla sky & tyro i hope u wont be angry at me now .
4.Where is the place you want to go the most?
Tawang (again) , Greece , Venice ... the list goes on .& of course all the places i'v stayed in .

5.If you have one dream to come true,what would it be?
As a kid , I had a dream that when i would grow up , i"ll be super successful really cool &all that. & then i would drive down my car to my own apartment which is tastefully done by me . but , the colour of my room is purple ( yes thats right).
& after parking my car , i go up to my room , sit on a cream coloured sofa , switch on the tv , watch something & then go to cook my dinner . after cooking & eating i'd be tired like hell & then go to sleep thinking " wow i finally did what i wanted to , i finally am independent".
6.Do you believe in seeing the rainbow after the rain?
I believe in seeing the rainbow during rain .

7.What are you afraid of losing the most now?

Idont know , maybe when I"ll lose something then I"ll know

8.If you win $1 million, what would you do?
I"ll keep on reminding myself that I mus'nt go mad , or stop working hard or stop aspiring for bigger things :) . waise a top open gaddi would be a good idea :D& maybe a trip to the places i wanna go & maybe some gucci ,valentino dresses & some of this 'n' that. .......

10.List out 3 good points about the person who tagged you
-- she tagged me .
-- raphael rhymes with racheal (from friends)
- she's nice


11.What are the requirements that you wish from your other half?
" all of us try to find love , &when we dont , we close our eyes to it , telling that there's no such thing , all the while waiting for it to come & wake us up , shake us & scream at us saying " its me , & only me "
as for the 'requirements' thing i actually don't believe in such things because in the end they don't matter ( well except ofcourse - a senile mind :P)

12.What type of people do you hate the most?
I dont really hate people , just some characteristics in them.
some of them being trickery , falsehood, & a rougish look in the eyes .

13.What is the one thing you can't live without?
people , people & people .

14. If you have faults, would you rather the people around you point out to you or would you rather they keep quiet?
I listen to only some people who over the years have wished well for me .As for others pointing out my faults its fine as far as its something valid & not something stupid as "you should put on more weight "

15. Racheal tag shows that this qwestun is missing. What do I do?
I put up a question ----" when was the last time you helped someone? why did you do it?"

16.Are you a shopaholic or not?
hehheheheheh only when mom is with me :P


17.Find a word to describe the person who tagged you
nice

18.If you have a chance, which part of your character you would like to change?
the part which gets tensed before exams.


19.What’s the last shocking thing you've seen or heard?
shocking thing heard :that the most bhola bhala paraku mumma's boy kinda guy of my class has proposed a dumb idiot who' also 6 years elder to him & already has 3 bfs ( at a time) & all this because the guy is really desperate now !!!!! & nothing because of the 4 letter L word !!
the shocking thing i have seen is : my star world has disappeared only to be replaced by some moronic CTVN akd (yuck) , where all day long male astrologers in salwar kameez & female "jyotishaas" in kurta pyajamas sit & talk shit (booo hoo hooo )


20.Would you rather have love but no money or money but no love?
I'd love to have both money & love .But taking a pick is really hard for me ( i wonder why :O most people wouldnt think twice before saying love ) but one things for sure , would never love someone for his money ,.

lastly this tag goes specially to vanilla sky & tyro . anybody else who wishes to take up this tag can do so too.

Waise ,yeah your blog was good.Although you are a senior blogger,a suggestionfor you,please give some gap between sentences and paragraphs...It makes reading pleasurable

You know me???thats funny...cool ..if "unethical" you does not mind chatting wid me..my id is snbhaduri@gmail.com

take me to that island too! I wanna be lost :)

You kissed Aamir Khan's screen picture? GIRL! You know he is mine right?

hehe gud one.... and u get so tensed bfore exams kya? that thts the only thing u wud wanna change in u! :O

Ahem!! Screen image kissing?? Is it still there?
Mmm, so those who tags you are good persons?
:)

@shirsesh
yup u finally got it . & thanx for the suggestion will keep it in mind.

@solitaire
u can have all of him. remember i was a nine year old then & "pehla nasha " had taken my heart away .

@amrita
thanku .thats actually one of the first things that came to my mind . & i wouldnt mind if u suggested something else too :)

@resurgence
agreed ,some tension is always better than none . but i get super tensed & then to avoid that spend time watching tv or something else which is equally bad .

to everyone who commented :
its really nice & generous of all of you to have commented . funnily , i felt that maybe i hadnt done justice to this post .but anyways , i think all of you are really great blog writers ( 100 % better than me atleast :D ) , so, thank you :)

Hii , I am realy sorry for being that late to the comments as was inactive for all good reasons for some time.
Coming to our discussion here in this post , I have particularly liked this
"that life is what it is & it will take you where it has to ,but of course, in the end you can say that I showed it the way.
"...
An articualte one to the marooned one was gritty and the twinkling was visible.
All that I read pushes me to ask " Are u doin something in human relations?"

"not something stupid as "you should put on more weight "
-hahaha!
nicely done :)


@chatty
thanx for the many compliments. & no i'm not doing something in human relations , though one of my friends tells me that i should be some kinda counsellor.

@vanilla sky
hehe thanks re

hey i really liked all ur answers though i must admit the first ans was simply awesome...in that i totally agree with u....

nice read amrita!
there were a few surprises along the way.
Anyway I think its irrelevant asking a gal if she enjoys shopping or not. There is no second answer.
You still haven't given a direct answer for the question
,"Would you rather have love but no money or money but no love?"

what do you think?? &am now curious to know about the 'surprises' this post revealed .

Oh! Since you are not giving me a direct answer I will tell you my answer. Its love because money is never going to be a problem for me :)
As far as the surprises are concern they are based on my preconceived notions so they don't really matter like I was surprise by your traveling spirit.

My Own Experience With Lakme Absolute Blur Perfect Primer